My parents were always in search of a sport which I could also maybe exercise with my spiritual impediment. Some time has already lasted, until we have found generally an association in which also geisitig handicapped sport pursue. Then we have found the RGS-Bönen Now since approx. 2007 I am in this association. My father looked for other sports. He had read sometimes from the racing wheel chair driving.


In 2009 he has announced me then by a Schnellfahr-taster course in Büsum.
It should will try out. If it makes good fun - when it makes good no fun - then also.
I can say You: It has totally given a lot of pleasure.
The trainer's team Heini and Gudrun Köberle has taken to itself big trouble me in them
" To initiate secrets of the quick driving" and to me a lending racing wheel chair provided.
Since him I drive racing wheel chair. Every year I go I to several courses around with other racing wheel chair drivers to be able to train.

For 2 years I am a proud member in the team "Rio shouts".
Besides, it concerns a project of the department of Athletics of the DRS to the promotion of young people, which of
of the company Invacare is promoted and under the direction of the trainer's team Heini and Gudrun Köberle stands.

Since 2010 I take part in the following competitions:
- Land masteries in North Rhine-Westphalia
- To international German masteries
- International sports party of the disabled persons in Wilhelmshaven
- To street runs

to train in the hall.
I must add one of course here: Without my parents this would not go!!
The lower picture shows me in my own racing wheel chair. I have got him in February, 2014.

Hi,
we had our first meeting this year. It took place at the sports college in Cologne.
We always spend the night everybody in the guest house. It is quite comfortable. The course was for most from us
to coach the first possibility for this year outdoors.
The weather was creepy. Then one more cold arrived with me.
Day 1: Journey till 17:00 o'clock, dinner and afterwards team discussion.
Day 2: We were in tomorrow on the sports field - for me one said first with the new roll neck
To carry out fine adjustments. I had to work on my seat position and him
Curve poster straighten. By the cold I was not so efficient completely.
In the afternoon we were, on the basis of continuous rain, in the gymnasium. There we had
then to coach the possibility on a rolling state.
Alongside my father still from all team members has taken portrait photos.
Day 3: First we have trained on the sports field, then there came again the rain.
So from in the hall. Then here we have done what for the reactivity.
At 12:00 o'clock there was still lunch and then we drive at home

Qick driving course from DBS in 2015 at the sports college in Cologne:

Hello
nicely this you have interest again!
It was a great course, like every year, again. We were a big group with 15 roll neck drivers. Every age was really represented. The latest ones were 5 years old.
On Friday was journey day and big identity learning. The new drivers have had the adaptation of your chairs and the owners of own wheel chair have dealt with plays or blethering


On Saturday and Sunday we had in each case two training units in the morning and afternoon. My dad was inspired how good I was on it. I had good starts and have driven a great time on 400 metres. The training on the role and the new chair becomes apparent so slowly. With it to her sometimes an impression of the taster course agrees I insert a link of my drop box. Here my father has put all photos of all activities (also with the other Teilenhmern). Should you have sometimes questions? As said, announces to You, nevertheless, simply about the visitors' book!!!
https://www. dropbox. com / l / CbaWa3loKQXjsqrIqrHMPp

I am this year with my father completely already is relaxing on Thursday was arrived, because on Friday already the first preliminary heat was attached for 100 metres.
Now Yes the preliminary heat was not necessarily necessary, because I with my damage class anyway in the course of the open class
go and thereby always only one run with at most 6 drivers comes about.
Then Saturday immediately started with 1500 metres. Because I the only T33 driver am have me flatly alone give up. Really!!: The weather coldly and wet; then still only about the clock fight.
I have concerned of course once more too fast the first round and then had to fight in the last-round quite a lot.
But: However, at the end I was better about 7 hundredths than the last year! Hey, that is European record improves.
And, however, against the rules there was a gold medal - nevertheless, goes!

Then gind it with 400 metres farther:
4 starters: with two ones my father immediately knew, they are too quick, this already said the start class.
But with the warm driving he had observed the colleague from Finland.
"You could pack him, but then you must give everything" he has said.
Thus my father saw the run:
Starting signal - Really got away Denis - is quick to him!! - yes, yes, - he creates this - the second curve, now he is with him on a height - yes, he moves vorbeiiiiiiii, "Really Denis - you create this - ziehhhh" - yes, yes, - Being this a great run!!
This is a time less than 1:30 min. of insanity!!
Then 100 metres:
It had rained before. Ähhh. The complete headwind on the distance.
Only three starters medallion securely - but the time is enormously important. 100 metre times is same for the fulfilment of quotas
because of world championship, Olympia or cadres importantly. It should lie with about 20. 20 sec.
What I should say: All together a very slow run - everybody were thus around 2 seconds behind her best times.
So also I with 23. 35 sec.

200 metres on Sunday:
These were only 3 starters again, this time the Portuguese has not come.
But the colleague from Finland which I can maybe hit.
However, in the start I got away too badly, the Finn was strong. I have fought and got closer. I heard the Anfeuerungsrufe - I struggled further come on. Ups,-----there was already the Ziellienie. However, "only" 3rd.
Dad means: a good 3rd because I would have fought thus!!
The time has also been quite good with 44. 24. If new record can not always be.
Nevertheless, it was this from Berlin, was a successful week-end, or?

Hello, dear fans,
this Rio calls course was the hammer!!
The transmitter KIKA was there and has turned a film about the Renrollstuhlschnellfahren. He was emitted on the 14. 10.
I have put here üfr to You sometimes the link here:
http://www . kika. de/kika-live/sendungen/videos/video21188. html

A great team has turned half a day with us and has made interviews.
At the end 10 minutes became for the broadcasting with KIKA out of that.

On Sunday an insert competition was planned with the ISTAF meeting in Berlin.
100 metre runnings before 25,000 spectators. This year I might be present the first spot.
We became treated like right fames. There was for every one identity card, which to drive us permissible directly under the Olympic stadium and to park there.
We had own responsible person who has led us by the stadium and was there always for us.
The road in the Olympic stadium was blue!! Many spectators, the television cameras - it were great simply.
Before the start everybody was introduced with a close-up to the audience.
Then each of us should look quite cool and raise the right hand.
What a feeling if so many spectators give then to applause, Because I with the strongest team colleagues this running
should make, my father has the aim: "not latter are exclaimed". Very ambitious!!
And? I was more last but one with a great achievement!!! 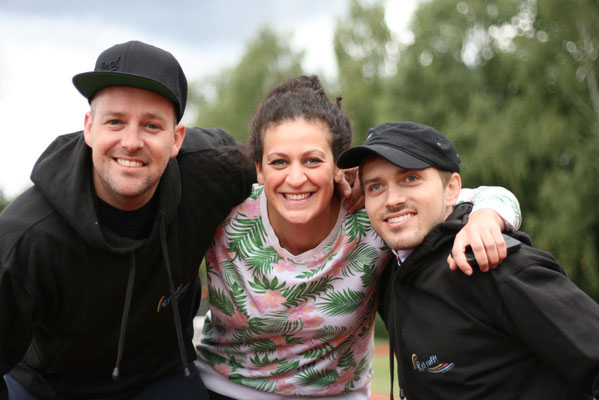 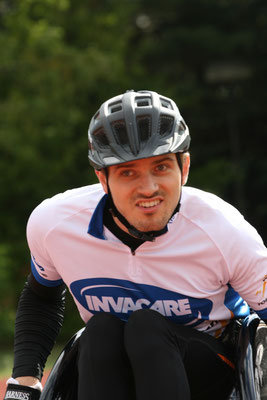 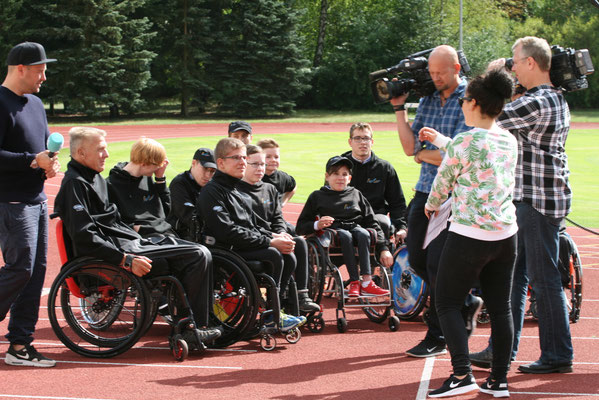 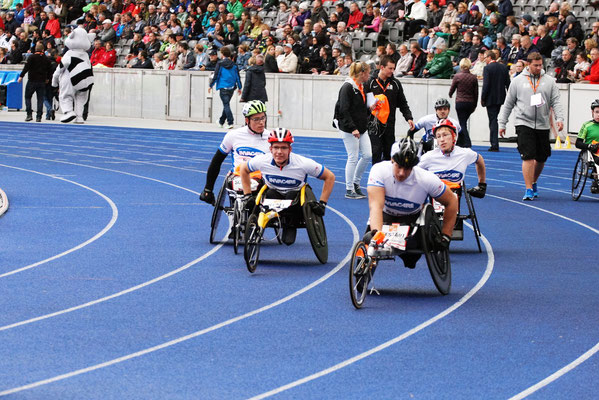 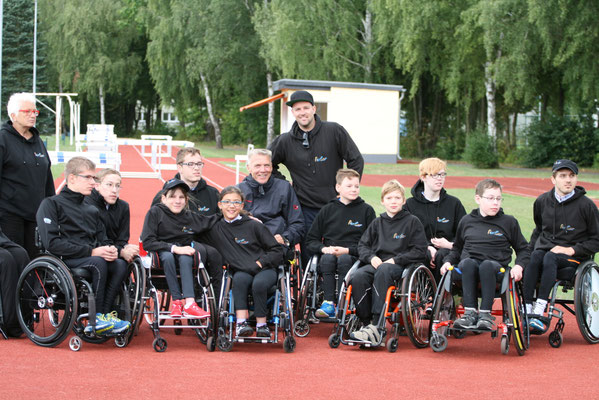 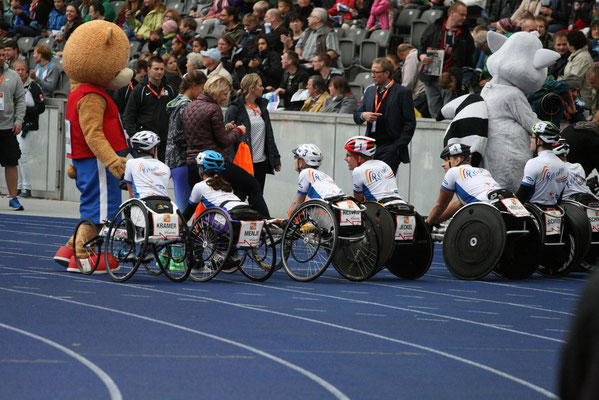